When all the adults in a school are committed to ensuring that all students are provided learning opportunities designed for their success, our efforts are more likely to result in increased learning. In such a school, teachers not only personalize instruction, they demonstrate a willingness to keep open minds and abandon ineffective practices while adding new research-based approaches that improve instruction and learning.

As I work with educators across the country, I am fortunate to have the opportunity to see and hear first hand evidence of extraordinary teaching and learning. This month I am sharing some of those stories so that you can celebrate these successes and consider how these stories validate their own experiences or provoke thought about implications for your own professional practice.

Including All Learning Styles
The fourth grade science teacher began a multi-sensory lesson by clearly explaining what the students would know and be able to do at the end of the day’s lesson. She then asked each student to share his or her understanding of the lesson’s goals with a partner. After reviewing and making a connection to the previous day’s lesson, the teacher creatively and flawlessly used a SMART Board™ to present new content. She also had students come to the board, interact with the content, and demonstrate their grasp of the new learning. Next, the teacher gave each student a plastic bag with concepts, definitions and examples on cards inside the bag. The students worked independently to match the items, and then compared their results with a peer. The teacher circulated and checked for student understanding. At the end of the lesson, the students wrote in their journals, and then responded to several teacher questions on Tickets to Leave that they handed to the teacher as they left for specials. The teacher shared that she used the data from the slips to check in with individual students prior to the next lesson, to provide feedback, and to clarify their thinking.

Communicating Assessment Criteria
The high school geology teacher was reviewing the content that would be included on the next day’s test. The information was shared in such detail that the students knew precisely how to spend their time preparing for the assessment. The students then broke into study groups during which they worked at placing fossils into appropriate categories. When students were asked the purpose of their group work, they explained that they would be required to answer such a question on their upcoming test. They further clarified that their teacher regularly allowed them to work in such groups the day before a test. They also pointed out that since their teacher followed this procedure, they were not only successful when they took their test but they tended to remember the content for a longer period.

Promoting a Conceptual Understanding
A fifth grade math teacher explained why she had students work in groups to solve math problems. She said that she had read research that pointed out that most math lessons focused on steps and procedures rather than the development of a conceptual understanding. Given that information, instead of giving her students worksheets or packets, she presented her students with problems to solve that required them to apply a concept in order to reach a solution. She noted that she told her students that not all problems had an immediate or easy solution and that some problems had more than one answer. She wanted her students to put their heads together to see what they could learn from working with one another. At the conclusion of the lesson, some groups had solved their problems while others were not as successful. The teacher then conducted a debriefing session during which the students made multiple references to the concept they applied in their work. It was readily apparent that they had a deeper understanding of the math concept they were studying.

Setting Personal Goals
At the beginning of a new unit, a seventh grade social studies teacher provided an overview of the upcoming unit he had planned for his students. He explained that they would be assessed through teacher-designed formative and summative assessments as well as student self-assessments. After his introductory remarks, the students immediately took out their notebooks with little direction from the teacher. The teacher expressed his satisfaction that the students had become accustomed to the practice of setting learning goals for each new unit. As the students wrote, the teacher explained that he had seen a marked improvement in the students’ learning as a result of having them write out individual goals for their new learning. The goals were unique to each student and were based on past experiences in the class. He further clarified that he stopped periodically during the unit to allow the students to monitor their progress and to readjust their goals when necessary. He felt that the improvement in achievement was well worth the class time it took for the students to record and monitor their learning goals.

Standing and Delivering
A high school Spanish teacher shared a procedure she incorporated into her assessment practices that made a significant difference in student performance. On the day before a test, she asked each student to prepare five review questions each on separate index cards that they would study as they prepared for the assessment. Prior to the students taking their test, she had them form two, face-to-face lines; the students quizzed each other by asking their prepared questions. The teacher then asked one of the lines to move one place to the right and the students repeated the process. After several rounds, the students returned to their desks and completed their test. The teacher concluded that the students performed much better on their tests because the brief exercise with peers brought the important information to the forefront of their thinking.

Intervening in a Timely Manner
A first grade teacher moved fluidly around the classroom checking on the progress of each and every student as they completed their seat work. She paused to speak to selected students while simply looking over the shoulders of other individuals. She took great care to check on each individual. This second year teacher told me that she had discovered during her first year of teaching that intervening as students were learning made a critical difference in student learning. She found that this practice of frequent checking meant that students were not practicing errors or becoming unnecessarily frustrated. The school in which she taught had a separate daily 30-minute time period set aside for intervention and/or extension of learning. She found that she was able to use this time more often to extend learning since “on the spot” intervention had become such a routine part of her everyday practice.

Emphasizing Learning
High school chemistry can be a huge challenge for many students but when a teacher sets students up for success though appropriate methodology, the experience for students can be exciting and satisfying. In a recent class, groups of students were working on a task in groups of three. Each group was able to articulate the purpose of the learning experience and how the process helped them learn. They supported one another, discussed the content, and clarified their learning as they worked together. When a short line of students formed in front of the teacher’s desk; I asked what the students were doing and students reported that these students were getting feedback from the teacher that they would report back to their group members. The teacher’s expectation was that no student should hand in work unless it was correct. When I asked the students if other teachers followed such a procedure, they simply responded, “We wish they would!”

Interacting with Students
An ESOL teacher had been experiencing, in his own words, “less frustration and more satisfaction” as a result of his new approach to teaching his sixth grade students. Until recently, his primary delivery of content included “way too much teacher talk.” He modified his direct teaching approach and spent more time listening to, watching, and interacting with individuals and groups as they worked. He made himself a participant in the student groups rather than serving as the “authority.” He found that allowing his students to work and interact with one another and then reflect on their learning in writing had increased the rate and depth of student learning.

Changing One’s Mind
A senior government teacher explained that he had had a change of heart in his belief system. He said that he believed for a number of years that a student had the right to fail and that a high school senior was old enough to make that important decision; if a student did not graduate, it was a logical consequence for the student having made bad decisions. However, the teacher recently read statistics about the unfulfilled and often depressing future that individuals without high school diplomas faced. He spoke with great conviction about his responsibility to provide more encouragement, more scaffolding, to monitor his students’ work more closely, to allow students to demonstrate their learning in different ways, and to be more adamant in promoting a positive work ethic.

Being a Mentor
An administrative assistant at a middle school spoke with great pride about her time in a mentoring role. She explained how she had helped her mentee clean out his locker and organize his notebooks for different subjects. At first, the young man was distant but he learned to trust her and their relationship has improved. She communicated regularly with each of his teachers and helped him keep up with his assignments during their weekly meeting. She explained that she had seen a marked improvement in his attitude toward school and his grades were all moving in the right direction. She explained that the principal expected every staff member to contribute to the success of the school’s students. Her final comment was that she “wished she had become a mentor much sooner.”

There is a common thread that runs through all of these stories. These scenarios describe teaching and learning in schools where educators share and act on the belief that they can make a difference in the lives of their students. They demonstrate willingness as professionals to take risks and venture into unexplored territory to try new ideas and ways of thinking. What stories from your school might you add to those presented here?

Permission is granted for reprinting and distribution of this newsletter for non-commercial use only. Please include the following citation on all copies:

Free Top Ten Tips to Ask Myself as I Design Lessons

“These questions can be used to promote thinking about teaching and learning during the planning process, while teaching, and again when reflecting on the impact of the lesson either alone or with a mentor or supervisor.” 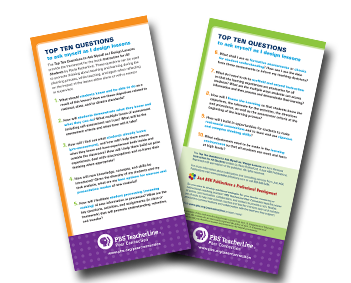