Bruce Oliver, the author of Just for the ASKing!, lives in Burke, Virginia. He uses the knowledge, skills, and experience he acquired as a teacher, professional developer, mentor, and middle school principal as he works with school districts across the nation. He has written more than 150 issues of Just for the ASKing!  He is also a co-author of Creating a Culture for Learning published by Just ASK.

Administrators in our Leading the Learning® workshop series are often asked to capture evidence of best practice during classroom walk-throughs. In a recent series in Vance County Public Schools, Henderson, North Carolina, when administrators were asked to bring artifacts of teacher and student work that represented 21st century practices, Kristian Herring, principal of Zeb Vance Elementary School, shared a video he had captured on his phone. In the video, the teacher had students stand at their seats and engage in a series of small exercises to energize them and better prepare them for the next learning experience. The video reminded all of us that movement in the classroom can have a powerful impact on student learning, and it spurred me to investigate the topic. Important points that surfaced include:

Brain researcher Eric Jensen summarizes the research on the importance of movement when he notes that there are “strong connections between physical education, movement, breaks, recess, energizing activities, and improved cognition.” He further writes that research has determined that “movement can be an effective cognitive strategy to

Despite an abundance of evidence, many teachers are not yet aware of the benefits of movement; instead they adhere to the traditional classroom practice of having students remain in their desks. A deeper investigation into the importance of movement is definitely in order. Keep reading!

Move’m or Lose’m
According to Engaging Schools consultant Michele Tissiere, students who are stationary for too long can become distracted or distractors. As a result, student energy ebbs and focus fades. Tissiere recommends a protocol called 30/90/10 (Move’m or Lose’m). At least once every 30 minutes, students get out of their seats for 90 seconds and move at least 10 feet. The strategy raises heart rates and epinephrine levels, which prepares students for energetic action. https://engagingschools.org

Conver-stations
The Teaching Channel is an excellent source for innovative instructional strategies. In a recent post, Sarah Brown Wessling, a high school English teacher, the 2010 National Teacher of the Year and Laureate Emeritus for Teaching Channel, teacher, offers a strategy she calls “conver-stations.” Students are placed in discussion groups where they lead conversations on predetermined topics. Periodically, two students from each group move to a new table where the discussions continue. The practice repeats itself when two more different students move to the next group where they listen but also add new dimensions to the exchanges. In short, the students, and not just the teacher, are leading the talks resulting in deeper thinking. In the groups, a student recorder writes down pertinent points that occur during group discourses. The activity concludes with a full class discussion based on ideas that emerged at the “conver-stations.” The students can be seen in action on the Teaching Channel. www.teachingchannel.org/videos/conver-stations-strategy

Sitting is the New Smoking
The tagline above has become the latest popular way of focusing attention on the negative impact to our health from prolonged sitting. According to Harvard educator Nina Fiore, “Every day there is a new article highlighting research which shows how bad sitting for long period of time is, not only for productivity, but for overall health.” Since we want our students to be health-conscious adults who will lead active lifestyles, we can set them on the right path by keeping them moving when they are young.
www.creativitypost.com/education/the_benefits_of_movement_in_schools

Finnish-ing Schools
Over the past decades, we have often heard about the success that has been achieved by schools in Finland. One variable that has been attributed to their success is the practice of providing 15 minutes of recess/movement for each 45 minutes of instruction. Researchers have concluded that this convention is part of the reason for Finland’s ongoing achievement success. Some schools in the U.S. have reduced or eliminated recess or break time to spend more time on math and literacy, but this practice may not have reaped the anticipated achievement results. Perhaps Finland is “moving” in the right direction.
www.theatlantic.com/education/archive/2015/01/finnish-schools-are-on-the-moveand-americas-need-to-catch-up/384358/

Movement Should Not Be An Afterthought
Some schools in the U.S. have taken the initiative to not simply include physical education as a necessary part of their curriculum, but they have also applied the research on movement by incorporating it into classroom lessons. The findings are clear: Lessons in which students develop deeper understanding of content and retain what they learn longer are those that incorporate movement into the lessons. As Fiore has written, “Whether it is using your own feet as a source of measurement, role playing a fight between the Aztecs and the Conquistadors, or having students circle and (gently) crash into one another to physically demonstrate how atomic particles behave during fission and fusion, students are more engaged and have better retention of subject matter when they are physically active during the lesson.” Paula Rutherford’s latest publication, Active Learning and Engagement Strategies, is an excellent resource for teachers seeking new ways to get their students more physically and mentally involved in their lessons. As teachers plan their lessons and units, they should automatically plan movement into the learning process.

Brain Breaks
Michael Stracco, a high school English teacher in Rutherford, New Jersey, makes the case for movement with a very succinct statement: “Remember, if the bum is numb, the brain is the same.” In his writings, he proposes the use of brain breaks that can work in K-12 settings. Among his suggestions are the following ideas:

Other teachers have shared practical suggestions for movement including the following ideas:

As Eric Jensen writes, “Although many educators know about the connection between learning and movement, nearly as many dismiss that connection once children get beyond first or second grade.” Because some teachers rarely include movement in their lessons, students may feel awkward because they are expected to “be still and think.” Jensen asserts that teachers should use movement opportunities to help students of all ages better understand mind-body relationships.

We are all familiar with the term “Seat Time,” often based on Carnegie units; it represents the amount of time students have “sat” in classrooms rather than what students have actually learned. The term came into use in the late 19th century and early 20th century. Maybe it is time to update this misnomer to represent what should be happening in our classrooms and schools. Perhaps “Learning Time” is more appropriate. 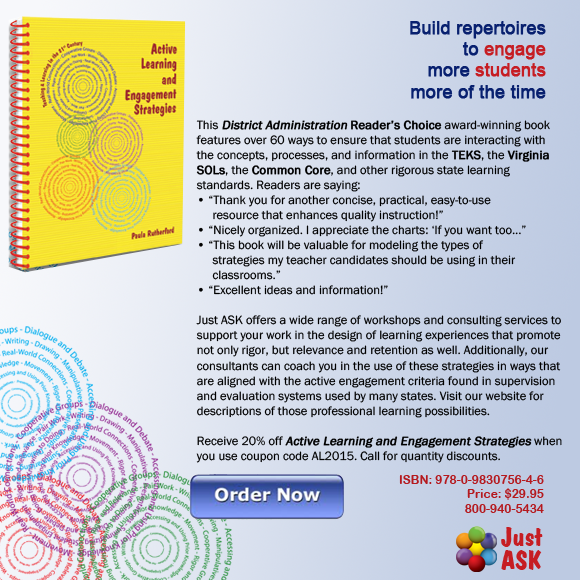 Permission is granted for reprinting and distribution of this newsletter for non-commercial use only. Please include the following citation on all copies:
Oliver, Bruce. “A Moving Experience” Just for the ASKing! September 2016. Reproduced with permission of Just ASK Publications & Professional Development (Just ASK). © 2016 Just ASK. All rights reserved. Available at www.justaskpublications.com.